Strategic management and the experience of running a company based on core values have enabled each of the siblings to run their own separate industry business, each producing a completely different type of footwear. In this way, the development of the businesses builds on the strength of the Conhpol brand without creating competition for one another. 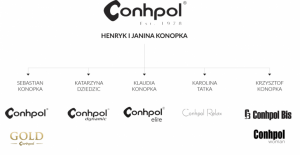 We have a lot of industry experience, pay close attention to even the smallest details and have sound business judgement, which has helped us become the market leader for domestic footwear.

Our desire to succeed has led us to increase the amount of goods we export each year to foreign markets. Conhpol collections are now offered not only in Europe but also in countries like Oman, Ecuador, Kuwait, the United States, Mongolia, Saudi Arabia and Qatar thanks to the dedication and passion of our team. They are also valued in Italy, which is known as the birthplace of footwear.

With our products bearing the Made in POLAND and Made in EUROPE labels, we are proud to represent dependable Polish craftsmanship in such remote regions of the globe.

When making Conhpol brand footwear, we only use leather from Poland and Italy that meets European production standards.

and its evolution through the years

1977 – awarding the title of Master Craftsman